The service is currently not available
Exchange Rate 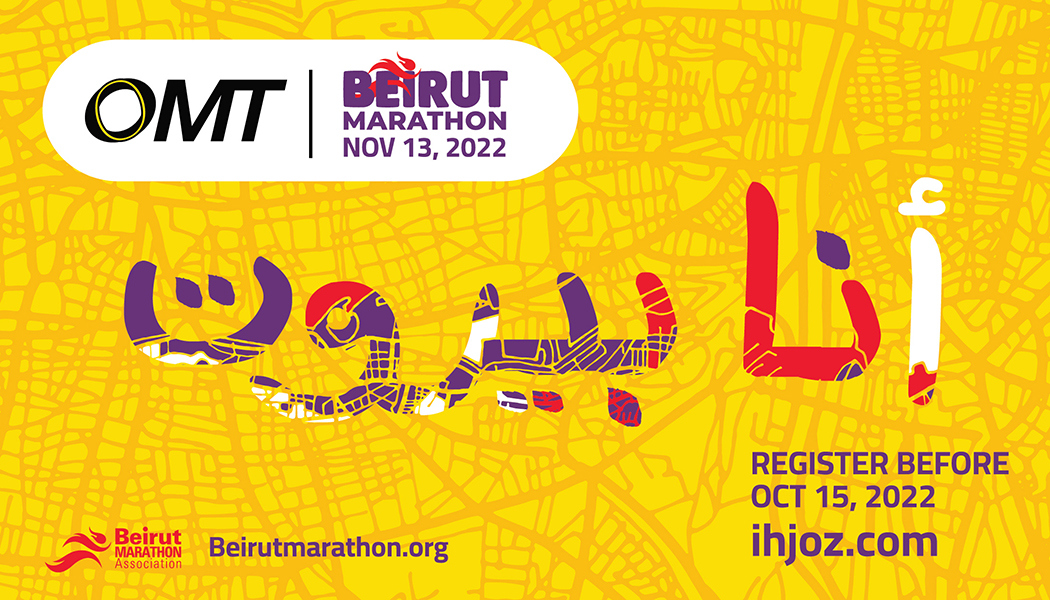 OMT Beirut Marathon campaign launched under the slogan “I am Beirut”

The Beirut Marathon Association organized an event to launch the campaign of the OMT Beirut Marathon under the slogan “I am Beirut”. The marathon will be held on Sunday, November 13, 2022, at the Beirut Waterfront.

The event was beautifully planned and organized by MFG Consulting, under the direct supervision of its Managing Director Michele Fenianos, assisted by her professional team. The event was hosted on the patio of Sursock Museum, in Sursock street, Ashrafieh. It was lit up with different colored lights as a witness and victim of the destruction caused by the Beirut Blast. The event was attended by public figures and officials who were welcomed by the President of the Beirut Marathon Association, May El Khalil, and members of the executive committee. Among the attendees was Tourism Minister Mr. Walid Nassar, and Chairman of OMT, Toufic Mouawad, as well as Vice-President of OMT, Hikmat Abou Zeid.
In his intervention, Abou Zeid introduced OMT and its financial services, stating that the company contributes in creating over 4,000 job opportunities directly and indirectly. He highlighted OMT’s corporate social responsibility that has been at the heart of OMT since its establishment in 1998. He also emphasized the national role and importance of May El Khalil who launched the Beirut Marathon after a painful personal experience, stemming from her faith in life, in Beirut, in progress and resilience. He saluted her for organizing the Marathon over the course of 20 years, this significant sporting event that put Lebanon on the international sports map as it attracts athletes and runners from all over the world and strengthens sportsmanship among the Lebanese.
He added that OMT wanted to sponsor the Beirut Marathon as an act of faith in sports and their positive effect on the Lebanese youth, the Lebanese in general, and Beirut in particular, and because this race will allow the company to contribute in supporting over 40 NGOs in Lebanon.
He concluded that on November 13, “we will run together through the streets of Beirut, as a show of resilience, solidarity, hope and peace, and under the slogan, “I am Beirut”.”
May El Khalil also spoke and thanked journalist Nathalie Mamo who travelled from Dubai to moderate the event with grace and professionalism. She also thanked MTV Lebanon, providing the exclusive coverage of the Marathon, as well as all journalists present.
She noted that it would be very easy to give up, withdraw and fall into a pit of depression, because of the lack of electricity, water, and old-age insurance, and because of negligence, poverty, hunger, emigration, poor communications, inflation, corruption… “We could wonder what we’re doing organizing this event today, and why we insist on continuing 20 years later… If we give up, what would we gain?”
She added that through her role in the Beirut Marathon Association, she committed to sending a message of love and peace through a sport that has gathered all the Lebanese and helped them forget their worries and their pains. It has planted a seed of joy in their hearts and encouraged them to run together, filling the streets with laughter and songs. She clarified that politics isn’t her goal, legislation isn’t her interest, and her decision is made: “I am Beirut; Beirut is my life, my family, my parents, my loved ones, and no one can stop us from all being Beirut.”
She stated that, for the sake of Beirut, we will hold the marathon once again in partnership with OMT, that has put its trust in this sporting events and believed in the Association’s national, humanitarian, charity, and sporting goals, launching the campaign under the slogan “I am Beirut”. She added: “I welcome OMT’s Chairman, Toufic Mouawad, and members of the Board of Directors, thanking them for their faith in our mission.”
El Khalil explained that this year’s campaign aims to attract the international running community to Lebanon, and that will have a huge and positive impact on the struggling economy and promote Lebanon as a great sports destination.